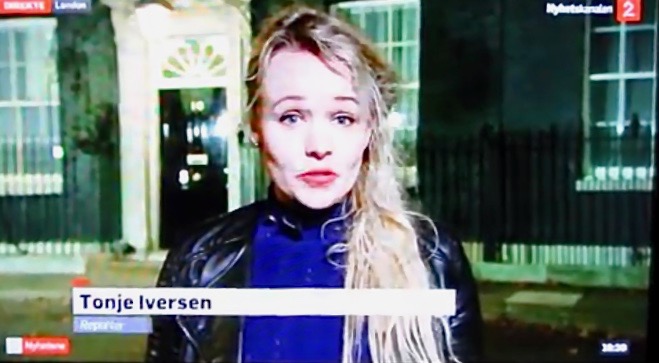 Tonje Iversen remembers exactly where she was the day the UK voted to leave the EU – in a bar in her home town of Tromso with three Norwegian politicians, one from the Conservative party and two from the Socialist party. None of them thought Brexit would happen; Brits are just too conservative and it’s way too dramatic to leave the EU were the main arguments that night. How wrong they were.

Brexit was a massive surprise in Norway. A few months after the vote I moved to London to work as a reporter for two Norwegian news outlets. Brexit was going to dominate in the world of foreign affairs for quite some time.

Of course, I was expecting people to have opinions about Brexit and to feel strongly about it, but I was not expecting it to be as divisive as it has been. People I have known as very calm and composed, clearly showed their outrage in social media. Sometimes in a brutal way, especially when they wrote about Leavers.

Brexit was personal. A new identity was created. Either you were a Leaver or a Remainer. And depending on which box you ticked you became friend or enemy.

Brexit appeared to be the painful heartbreak you never get over. A heartache followed by denial, followed by rage and resentment. Followed by ideas about how the UK could get back together with its long-term partner again. The impossible break up, a love story coming to an end.

At least for many people – but for many others this was liberation. Freedom from what many see as an elitist undemocratic organisation. An abusive relationship that had to end. A partner you do not really understand and that seems anything but fair or transparent. To them the Remainers became the enemy, the ‘out of touch’ elitists who would like to overthrow the will of the people. The losers of the referendum who dared to accuse and label them as stupid, ignorant and racist.

It became clear that people did not ‘have’ opinions about Brexit, they had ‘become’ them. Thus, every conversation about Brexit became personal. Every attack on the side you adhered to became as if you where the one being attacked, not a view or an opinion, but your very self. And so, everything you attached to your identity, every value you had were under attack.

It was as if Brexit has become the free zone where everything is allowed. Where everyone is entitled to say whatever they want without having to listen. The topic where it is legitimate to be abusive, in particular in social media.

Before June 2016 Brits used to ask me about the Northern Lights, Norwegian politics and the suicide rate in Scandinavia. Now it’s Brexit. What do I as a Norwegian journalist in the UK think about Brexit? What do I think about being a member of the EEA, how do I feel about a soft Brexit modeled on Norway, or a Norway + model?

I do not feel strongly about Brexit. And I always sense disappointment that I’m not outraged enough. If Norway had been a member of the EU I might have felt it more personal. Like the UK was leaving me too. Or rejected me. Rejected the country I’m from.

Norway voted twice to stay out of the EU. Something that earned us a place on the map as ‘the greedy selfish fisherman’s land’. But Norway is strongly tied to the EU through Efta and the EEA.

We may not be a part of the customs union, and not a member of the EU, but we adhere to all the rules and laws of the single market. I could move freely to the UK, as I did for the first time in 2010 to study. I remember I was annoyed to find out that I had to pay much more in tuition fee than my European friends as a consequence of not being from an EU country.

The majority of politicians in Norway talk of EEA as a good compromise. Many politicians would rather see Norway as a member of the union, but as the people voted to stay out, EEA is seen as the best solution.

However, my impression is that most people would like to either be in the EU or out, not half way in as many people see the EEA. It is not seen as a great compromise because the people who are pro EU think it is ridiculous to pay money and adhere to all the rules without having a say. The people who do not like the EU argue their case pretty much in the same way and some feel that the Norwegian parliament and the political elite snuck Norway in through the back door.

The UK was probably more shocked than any other country the night of 23 June 2016. I know my news feeds surely were. In particular my British friends expressed their shock and surprise. The look on British politicians was pretty revealing too. This did not go as expected. They were not prepared, and it became clear, pretty soon, that this would not be the easiest thing in the world.

A British journalist asked me to describe Brexit with just one word, but I now rather describe it with three – divisive, turbulent and messy. After Brexit, British politics has been dominated by questions without any solid answers, uncertainty, chaos, U-turns, indecisiveness, opportunism, in-house fighting and confusion.

My Conservative friend called me a few weeks after I moved back to London in 2016 and said: “Brexit is never going to happen. I might have been wrong about the vote but it is a too complex task, it is simply impossible”. Now, more than two years after he still reminds me: “Look at the mess in Westminster, I told you so, it will never happen”.